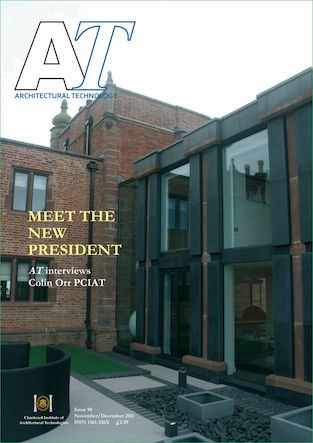 "This issue’s cover shows the extension to the Grand Lodge in Upper Longdon, near Rugeley, Staffs. The project was shortlisted in the Local Authority Building Control Building Excellence Awards 2011.

"Glen Smith FBEng, Director of Park House Design Ltd, is delighted that The Grand Lodge, a Grade II Listed Building, Restoration & Extension project, has received national recognition in the LABC Building Excellence Awards 2011. Having already scooped the Local & County LABC Building Excellence Awards earlier in this year, the project has now been shortlisted as a Finalist representing the West Midlands Region at the National Awards to be held at a Formal Evening Ceremony at The Brewery in London. The project was also recently shortlisted for the Southern Staffordshire Partnership Design Awards 2011, to be held later in the year.”

CABE | Journal of the Chartered Association of Building Engineers | Volume 86 No. 11

"Once again the Grand Lodge, a Grade II Listed Building Restoration & Extension project, has received early recognition in the Southern Staffordshire Partnership Design Awards 2011. Having already scooped the Local & County LABC Building Excellence Awards earlier in the year, the project designed by Staffordshire Architectural Firm Park House Design Ltd, has been shortlisted for the Awards to be held in October.

The Awards, run by the Southern Staffordshire Partnership and co-sponsored by Staffordshire Life, seek to promote achievement of excellence in design and construction of buildings and spaces in the area, with imaginative use of public art and an increasing incorporation of sustainability.

The Awards are open to architects, developers, builders, in fact anyone involved in a building, public realm or refurbishment project anywhere within the Stafford Borough, Cannock Chase, East Staffordshire, Lichfield, South Staffordshire and Tamworth. An independent judging panel, led by Midlands Architecture and Design Environment (MADE), will view and visit individual schemes and an Awards Luncheon will be held later in the year.

This year the Partnership hopes that David Dimbleby will pick an overall winner from those selected by the judging panel.

Glen Smith FBEng, Designer & Managing Director at the Architectural Practice, said 'it was super news to again be linked with the project and hopes all the hard work undertaken by the Design & Construction Teams, Local Authority & Client, will be rewarded at the Awards Ceremony in October'.”

CABE | Journal of the Chartered Association of Building Engineers | Volume 86 No. 08

The project was overall Winner in the Category of Best Domestic Extension over 40 square metres.

"Glen Smith, Fellow Member, Designer and Company Director of the Architectural Firm said 'we are again delighted by being recognized and associated with the project and all involved'."

CABE | Journal of the Chartered Association of Building Engineers | Volume 86 No. 03

RECOGNISING THE BEST OF ARCHITECTURE